There seems to be lot of interests in slimming down all kind of libraries lately. Anyone trying to bring his great application or framework to a mobile platform maybe? For other reasons I was interested in the information passed to compilers and figured that having this information available can of course also be used to write tool to analyze dependencies. Given that I’m writing my thesis currently and need a bit of distraction every now and than I started working such a tool. By the way, it was a nice opportunity to play a bit with the Boost Graph Libraries. So, without further ado I present: C++ Dependency Analyzer. 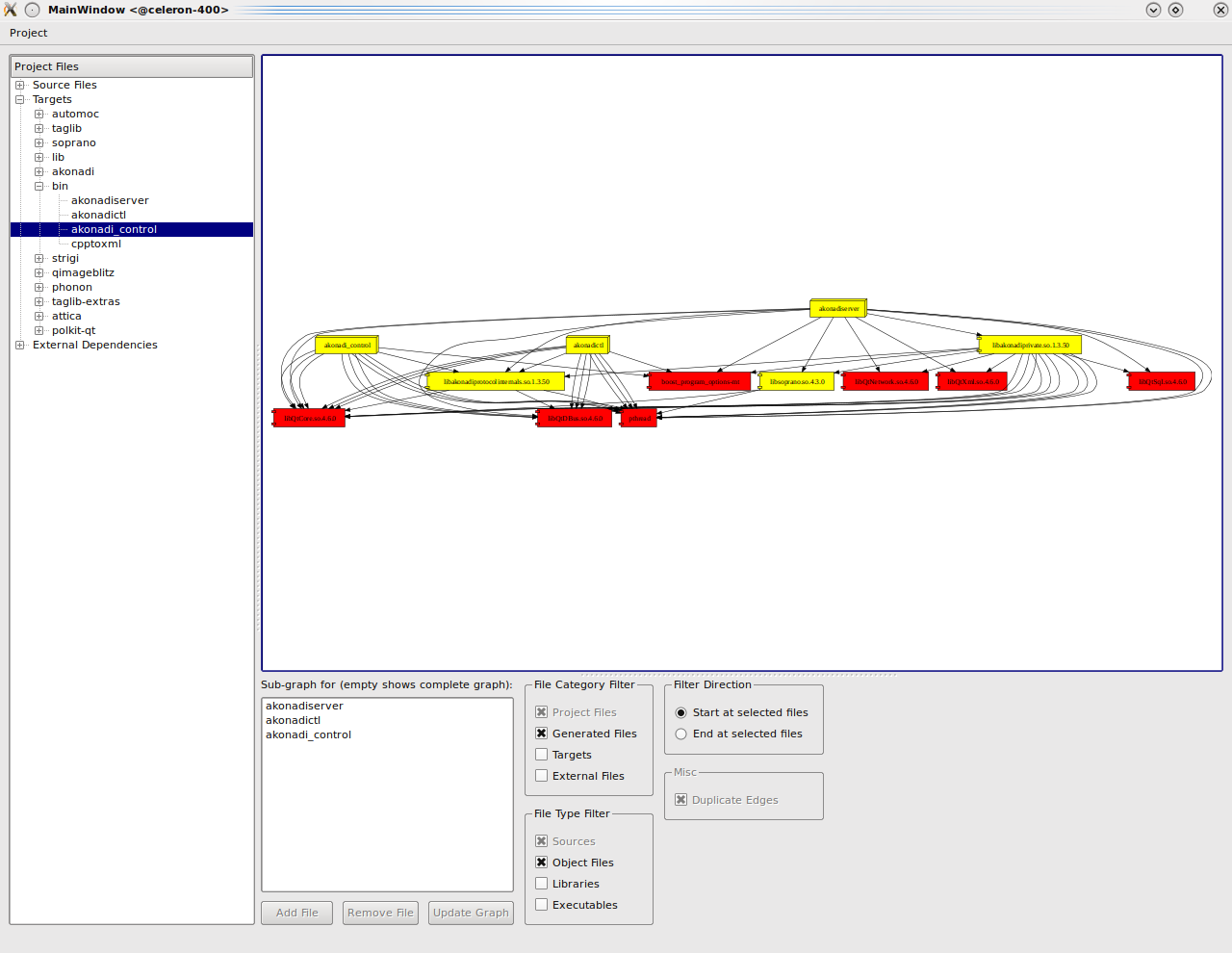 The tool reads a file with compile commands and creates a dependency graph of it. Yes, I am aware that CMake can create a dependency graph but that one is limited. Also, for other reasons I’m interested in other information you can get from a build too, but well that’s long term. Anyways, a graph of a complete project (e.g. kdepim) in itself is not very useful because its huge and cluttered. Therefore I started working filtering options. In the image you see the subgraph of kdesupport containing only the dependencies of akonadiserver. All this is in a very early state. However, colleagues of mine put heavy pressure on me to stop working on my thesis and make it available. Thanks Volker, Keven!

So, if you’re sure you want to play with it:

As said, the whole thing is in very early stages. The UI you see for filtering is *only* functional for the targets part of it. That is, you can double click a target in the tree and update the graph. This will give you the dependencies for the selected targets only. The rest of the filtering is only UI. The current level of filtering is hard coded to leave out any source files and any object files, though both are part of the underlying graph.

The actual information comes from a file which contains lines existing of: the current working directory and the arguments passed to the compiler. I only wrote a parser for g++ and tested it only with g++ 4. It has been used already to create the graphs for kdesupport and kdepim though.

It is really slow for large graphs.

Some ideas to make you work on this application…. eh to document what I’d like to add to the application somewhere in the near future.

I hope to find some time to make the filtering a bit more complete. I already started working on the ui for it, but it still needs to get integrated in the graph logic. Especially useful would be to add duplicate edge filtering, because duplicate edges really clutter the graph at the moment.

A wrapper which stores the same information in an unborked way when using multiple compile jobs would be nice too, to reduce the time needed to generate graphs. However, this is a low priority thing for me.

Exporting graphs to svg would be nice too. This should be trivial, thus boring, thus don’t expect it too soon.

I’m quite convinced that this application has a great potential for maintenance and packaging purposes. But again (I can’t repeat it enough I guess) its in a very premature state at the moment. Expect failures, crashes, your cat eaten and who knows what more which you will have to solve yourself. Add to that that I’m very limited in time currently so feature requests will only be accepted in the form of patches.

Last but not least I’d like to thank our stl and boost guru Marc Mutz for helping me to get started with BGL!

This entry was posted in Uncategorized and tagged c++, kde. Bookmark the permalink.

12 Responses to What do you depend on?